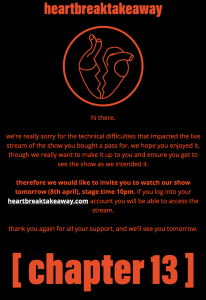 If you got a streaming pass for the Manchester show last night, you are in luck! The boys are sending out emails to everyone that had a ticket for last nights show.

The show was supposed to start at 8PM initially, then the AAA pass holders were let know it would be delayed til 8:30. They also updated the stream on the site to say it would begin at 8:30.

In reality it didn’t start until after 9PM because they boys started playing and got half way through their set before they realised nobody could see them. Once they realised their mistake they fixed the technical issue and played a full set -they must have been so tired by the end! They still put all of their energy into it and it was a great show.

To apologise for the delay they are letting fans with Manchester passes get access to Thursday nights show, which starts at the later time of 10PM BST to make it a better time for South American fans.

** EDIT: LONDON PASS HOLDERS GET AN EXTRA STREAMING PASS TOO **

If you don’t have an email yet, don’t worry. It seems not everyone has got it yet, just hang tight. Either way the stream should work for you tomorrow night if you had a Manchester streaming pass. Thanks lads! Can’t wait to see the gig!

we’re really sorry for the technical difficulties that impacted the live stream of the show you bought a pass for. we hope you enjoyed it, though we really want to make it up to you and ensure you get to see the show as we intended it.

thank you again for all your support, and we’ll see you tomorrow 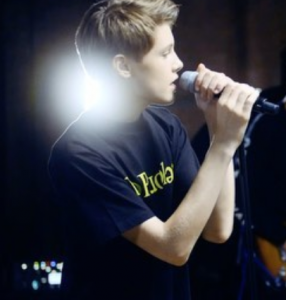 The streaming passes for the heartbreaktakeaway tour went on sale last weekend and sold out within an hour.

For anyone that missed out, there is a second chance! More passes will be released tomorrow morning 10AM (UK time).

Will you be getting one??

full video of stranger danger on heartbreaktakeaway.com at 8pm tonight as welllll🦋

Like they said the full version is going on heartbreaktakeaway.com tonight. The rest of the lyrics will be posted here once it is up.

In the meantime, here is an unseen clip of the song:

Chapter 13 have teased a clip from a 2019 recording of Looks Like You’re Having Fun. It seems like they recorded a whole music video for it that they never released!

If you need the lyrics they are here.

Going by the caption, they will be releasing more than just this clip shortly. Though it may be exclusive to members of heartbreaktakeaway.com. We will have to wait and see. Here is the caption:

little clip of looks like you’re havin fun from 2019 🖤
do you wanna hear more of it?
wanted you to hear it before you hear the new version

*The band have deleted this video*

I am sure you have already heard by now if you are keeping up with the band on their socials. The passes go on sale at 9AM (very soon) on heartbreaktakeaway.com

There are two different kids of passes you can get. The £6.99 one gets you access to a gig of your choice and a one month subscription to heartbreaktakeaway.com which will have exclusive content.

The AAA pass is the one that has caught most peoples attention. It really does sound amazing! For £69.99 you really do get an awful lot!

There are some new photoshoot pictures from the HeartbreakTakeaway shoot in the gallery.

Don’t forget that tonight at 6PM we will find out more about the virtual tour that will be starting soon. The gig dates and locations have been shuffled around a little bit but are still taking place on the same week.

Tickets will go on sale tomorrow at 9AM GMT! Don’t forget! 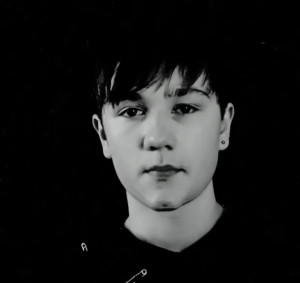 Chapter 13 have posted a new video with the cryptic caption:

I mean it delivers what it promises. It looks like this was shot during a photoshoot, and they did have one of those recently so perhaps that’s it.

Chances are there will be some screenshots from it in the gallery soon. Not much else to say about it really, watch the video here:

That title might seem cryptic but if it makes no sense yet, it will in a minute.

First off, the band released a clip of a new song Sunshine Avenue (listen below). Some of the lyrics are here but will be incomplete until a longer version is released.

We have a little more info on tickets for the virtual tour, they will be going on sale this Saturday at 9am GMT. No word on the cost or where they can be purchased from but that will be announced in the coming days.

If you try to go to HeartbreakTakeaway.com right now you will hit a ‘down for maintenance’ page. It may be that they are updating the site so we can buy tickets there. Read more to see the maintenance page and watch the clip of Sunshine Avenue.
END_OF_DOCUMENT_TOKEN_TO_BE_REPLACED

Chapter 13 performed live at the O2 in December 2019. They were supporting McFly.

The recently revealed that htey have been recording footage from their very first gig onward and will be releasing videos over time. Sign up to Heartbreaktakeaway.com to make sure you don’t mis any.

One of the videos they have released publicly is of their performance of I Don’t Like Me Too Live at the O2. You can get the lyrics here, and watch the video below: 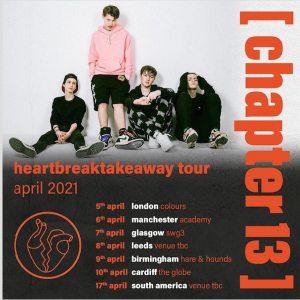 The announcement has been made, Chapter 13 are going on tour. On the Heartbreak Takeaway Tour they will be playing all of their new music at these shows.

The dates are for early April in London, Glasgow, Leeds, Manchester, Birmingham, Cardiff, and even South America – not that they are traveling to SA.

Of course the country is in lockdown, so these shows will be streamed live. They will be limiting capacity to these shows in order to replicate the sense of it being a real tour. They will be posting more details soon. They will be going live on the heartbreak takeaway account shortly, they are having their dinner first and then going live.

They have teased that they have another announcement coming – not sure when that will be.

Will you be getting tickets to the Heartbreak Takeaway Tour?