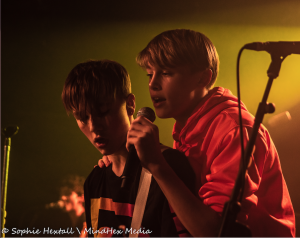 There are 75 more photos in the gallery from the Dingwalls gig in February! These pictures were taken by a fantastic photographer, Sophie Hextall!

It was during this show that Chapter 13 played their new song Jump. Did you get to see the band performing at Dingwalls? What was the best song that they played?

Click the photo on the left to see the rest of the pictures from this set. There are a lot of great pics in this album so I really recommend having a look.